[, Music ] all right. Welcome to my fortnight and house party crossover. So, as you can see, you can get yourself a free animated, rap called the rainbow fog check this out. This looks phenomenal. I’ll, show you some in-game gameplay as well, but first let me tell you how to do it because it’s.

Super super easy, so you’ve, probably already seen this video, but the moment you log into fortnite. Now this house party crossover video will play, and basically it gives you a little bit of information on how to get this free rap.

So house party itself is a free app. I guess it’s used for almost like face timing. You can see each other’s face as you talk, but they’ve incorporated it into fortnite, so faces from the house party app will display on the left of your screen, as you can see here, and you can chat, live with People as you play fortnite it’s, pretty cool, i’m, not gonna lie.

I don’t know. If i want my face plastered on there like, i’m, live streaming or not, but i can see the popularity of this. I’m, just a little worried about the lag, but i’m, not sure because i haven ‘

T actually tried it yet. So once you link your house party account to your epic games, account, which i’ll, show you how to do in just a second, then you get the rainbow fog wrap for free. Now there is one catch here.

Not everyone can do this. It’s only available for certain platforms, so here’s, what they say. We know that house party video chat is not available on all platforms, so we’re, giving you another way to get the rainbow fog wrap between november 20th, which is today and november 26th.

So you have six days to do this. If you play five matches of fortnite with friends, you’ll receive the rap by december, 4th 2020.. So from today, until six days from now november 26, all you have to do is party up with at least one person and play five matches.

Five matches in six days, i think everyone can do that. Even if you don’t want to link your house party and fortnite account now the good news, if you link your account, you get it right away. If you do this five matches method, it says you’ll receive the rap by december 4th.

So i guess you’ll, get it anywhere between november 26th and december 4th. So, like i said it’s. Super easy to do. I’m gonna walk you through it right now, so, first of all, on whatever device you’re on either android or iphone, go to your play, store and find house party.

This is what it’ll, look like on google play and then you just click install so once the download’s done open it up. Obviously – and this is the first screen you’ll – see it says, talk to your friends and you can either sign up or if you already have an account you can log in so i had to sign up so then it asks for your name.

Your username and then you have to put your birthday in as well. So after you make your profile, then this screen automatically pops up. You don’t even have to find it. It comes to you and it says: connect fortnite cast your house party into your fortnight games.

Tell you hey, you’re, going to link all your stuff together and you have to hit agree right there and then it’ll. Take you to this screen, which is how you log into your epic games, account you have a multitude of ways to do it.

I always do the very top option. So then, obviously you put in your name and password for epic games and once you do that, then this screen will pop up. It says: use house party with your epic games account and you just push allow down there and that’s.

It and then it’ll. Try to guide you through if you want to add some contacts from your phone, but i just skipped all that and that’s. All you really have to do once you log into your epic games, account from within the app then close, your actual fortnite app on whatever console you play on and log back in and it’ll say your purchased items are waiting for you and Then you ‘

Ll, see this screen right here. As soon as you log on the rainbow fog wrap and it’ll, say items acquired super easy. It took me about three minutes from the download to the linking my account to getting this actual wrap.

It appeared right away in my account again, though, you do have to close your app on fortnite. If you have it open so here’s, what it looks like i’m on the ps5, so i’m, going to show you in full hd graphics.

It does look pretty sweet. It’s, got a multitude of colors. It almost looks summery like a summer theme. Let me see if i can find a good combo and i ‘ Ll show you some gameplay alright. So i went with the loser fruit skin because she’s got an array of colors as well.

So this should be interesting to see what exactly this looks like all right, so i’m, going to show it in the daytime as well as the night time here it is on the sniper you can ‘ T really see it from this perspective, but let me shoot and we’ll reload and we ‘

Ll. Take a look, a lot of yellow right there, but it does change colors, as you can see. So it’s. Gon na turn to pink next pretty sweet. How about a shotgun? Let’s, see what colors it changes to. So it’s, blue and purple there and then a very light, blue and yellow and green and then a pink color.

Then it goes to pink and blue huh, so very bright, very animated and very very bright wow. Look at when it’s, all yellow that’s, crazy! Look how bright that is. It does look pretty good. It almost reminds me of a popsicle for some reason, so the entire gun almost changes colors, but then it starts to mix it’ll, go almost a full color, but then it slowly and gradually changes.

I like that. I mean there’s quite a few skins. You could probably run this with. I thought it would match loser fruit here, pretty good, but her colors are i don’t know how to describe it more watery.

Hers almost look fluent, whereas the wrap looks more like pastel colors, if that makes sense, still not a bad rap, especially considering it’s, 100 free all right here we go. The sun is finally setting wow.

Look at how vibrant it is in the dark. That is absolutely insane. Look at that do a few reloads here, so you can see here’s on the sniper that is beautiful. I don’t care that my controller battery is low.

We’re checking out this awesome camo, look at how vibrant that is way way cool here. It is on the pump okay. So it looks a lot better at night that’s for sure already saw on the og. I don’t know why it just reminds me of a giant popsicle.

Very nice, though, here it is on the regular burst. Definitely a nice wrap 100 free really easy to get there’s. No reason you shouldn’t try to get this, and even if you don’t want the house party app, like i said, all you have to do.

Is play five matches with friends, five matches and you got six days to do it awesome so that’s it that’s. All there is to it. Hopefully you guys enjoyed this video. A like is always appreciated and don’t forget to use my supporter crater code, which is taper time.

What Epic NEEDS To Do in Fortnite Season 5...

Mon Nov 23 , 2020
https://www.youtube.com/watch?v=8NkcGwZAsCk Hey what’s up guys? It’s cypher! Today we are gonna dive in on my season. Five wish list, and also we’re gonna talk about what worked in season four. What didn’t and what needs to change next season? Don’t forget to use creator code, cipher pk in the item […] 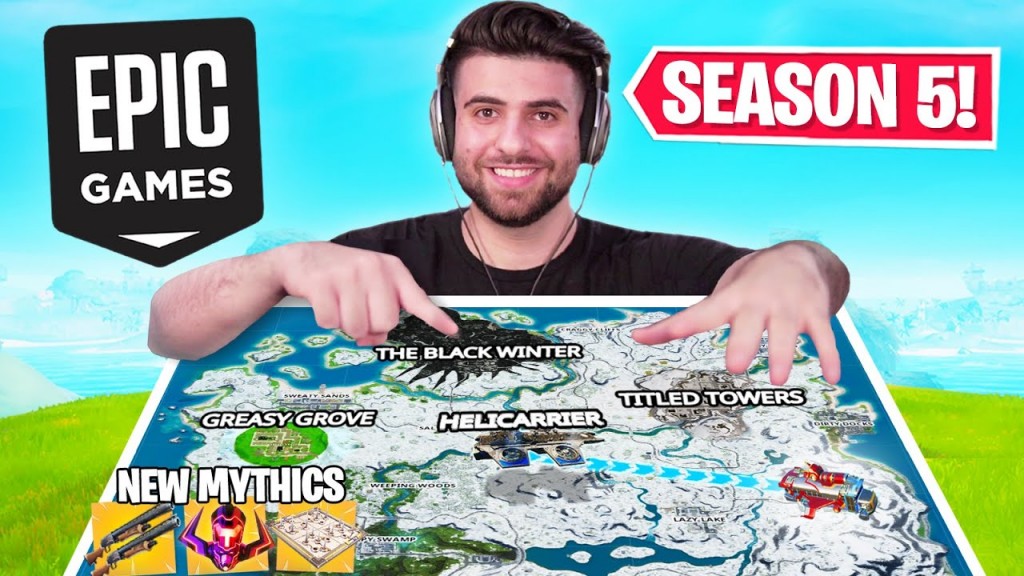