[ Music ] here take that we’ve got. This is one of the worst games i’ve ever played. The first thing i noticed was the screen tearing at first. I thought it might be a weird stylistic choice to emphasize the game’s visuals, but it kept happening almost every time.

I moved my character or looked around then i noticed the sound bugs. Sometimes weapons didn’t make noise. When i fired or reloaded them and then i started looking at the animations and they weren’t great either, i wish i could tell you that things got better, but they didn’t.

This is 13. play magic’s. Remake of the 2003 cult classic by ubisoft, paris and south bend interactive, which was based on the graphic novel of the same name. You got all that good. The original 13 was a unique game for its time, employing a cel-shaded art style which, hard as it is to believe, was pretty rare in 2003 comic book panels, split screen, camera cuts and floating words like boom and bang and crash whenever there was loud noises 13 Wasn’t a masterpiece, but it had some interesting ideas and a unique style that made up for its fairly banal.

Gameplay. It’s, one of those games that seemed primed for a remake polish up. What already worked and fix what didn’t and you’d – have an enjoyable experience on. Unfortunately, this isn’t to the game, play magic made aside from the laundry list of technical issues.

The first thing you’ll notice are the graphics. The original 13 successfully captured the look and feel of a comic book. There is some cell shading here, but the character models are largely unimpressive basic.

Looking things mostly, it looked like the artist slapped heavy black outlines on what are pretty standard, stylized character modes and called it a day, shading and shadows flicker on and off throughout the title, whether you’re playing or watching a cut scene, animations aren’t any better.

The characters faces, barely move reloading, a gun feels choppy and 13. The main character for those not familiar with the game opens doors by pointing a key at them and turning forget interacting with the lock.

These animations are so jarring that it might be just better to have the door swing open than pretend that we’re, unlocking it, and then there were the visual bugs and boy. Are there a lot of them? I already mentioned the screen tearing, which again was so bad at times that it happened every time i moved or turned the camera, but the frame rates might be worse.

I reviewed 13 on an xbox one x, which should be more than capable of running it, and every time i got into a large area or a big gunfight, the frame rate dropped into what must have been the low 20s. It’s, not a stretch, to say that the original game looks and runs better, which is pretty damning when that game is 17 years old.

The story is better largely because it uses the same vocal performances as the original david duchovny plays the titular hero and the late adam west voices general carrington. But the old and new audio sometimes feels like they’re, not synced up properly, which can cause a disconnect between what you’re.

Seeing characters do on screen and what you’re hearing like the rest of the game. 13’s, audio is riddled with bugs, which only serves to make things worse. Sometimes, guns won’t make noise when they fire, where you won’t have audio when you reload a weapon.

I didn’t run into any issues where dialogue wouldn’t play, but given the other sound problems, this game has, i wouldn’t, be surprised if such bugs exist when the game functions properly long enough to allow you To enjoy its story, the narrative is actually pretty engaging, though it is enormously plot heavy and jumps around very quickly which might confuse people who aren’t familiar with the source material.

The plot revolves around an assassination of the president, your character wakes up with a gunshot wound on a beach with a nasty case of amnesia, and it’s obvious pretty quickly that you’re being blamed for the whole thing, with only A tattoo of the number 13 on his arm and some scattered memories to go off of.

He sets out to find out why he’s being set up for the president’s, murder, who he is, and what’s? Actually, going on the remake hues very closely to the original game, so you’re unlikely to see any new surprises.

If you’re a returning player, the narrative can be a bit convoluted, but it wraps up nicely by the end and answers most of the questions it poses like the original game. However, it does end on a cliffhanger that seems unlikely to be resolved.

While the story can be enjoyable. You ‘ Ll, unfortunately, have to slog through a lot of really tedious and uninspired gameplay segments. To get there most of the guns you’ll, find simply don’t feel good to use with notable exceptions coming in the form of the sniper rifle m16 and crossbow.

The rest, however, lack any kind of impact, whether in terms of audio or visual feedback, when you fire them enemies, take bullets without much reaction until they enter what seems to be one of two death animations that the game has staggering for a second before falling forwards, Or backwards once i got too close to an enemy and he began freaking out his model doing things you’d, associate with a horror game.

It was a nice change of pace from seeing the same canned animation over and over again, but it is emblematic with the larger problem with 13.. Everything about it is broken. The game tries to make up for its mundane gunplay by throwing a lot of enemies at you.

Unfortunately, they’re dumb as bricks, mostly standing around waiting for you to kill them. Even after you’ve killed one of their buddies right in front of them when they do notice you, which often happens for no discernible reason they’ll charge at you, firing mindlessly until you mow them down.

The game is incredibly easy. On the standard difficulty, so i’d, often switched my fists to give them a chance. Unfortunately, the melee combat feels just as uninspired as the gunplay and enemies are still pathetic, whether you’re, beating them to death or filling them full of lead.

There are some cool visual touches here. Shooting someone in the head triggers a series of comic book panels at the top of the screen that tracks the shot and its impact, but they hardly make up for how poor everything else is.

If you tire of the game’s, traditional combat – and you will very quickly you try to go about your business stealthily. If it’s possible 13 stealth is even worse than its gun play. You can pick up chairs or ashtrays and whack people over the head with them to knock them out and that part works.

Well, if you don’t have an instrument of blunt force trauma available. You can also sneak up behind someone and give them a karate chop to the back of the neck. This works great until it doesn’t. Often the game will unequip whatever weapon you’re carrying and you won’t.

Do anything generally, this led to me mashing the karate chop button, which did absolutely nothing until the enemy noticed. I was behind them and started to shoot at me and i had to beat them to death because the game had unequipped my weapon.

You can take hostages, though, that’s, just as useless as the stealth kills. The one time i did it, which was when the game forced me to 13 informed me that enemies, wouldn’t shoot at me. As long as i kept the hostage between them and me so i took my hostage walked out the front door in front of me and every enemy in the place, all of whom were in front of me, opened fire.

This didn’t seem to affect my hostage who took bullet after bullet without complaint, sound or anything else, but getting shot hurt and holding the hostage did make me move more slowly and prevented me from reloading my gun, so i eventually dropped her so 13 could get on with murdering everyone in the room.

I never took another hostage during my time with the game, because i assumed that, like almost everything else in 13, the mechanic wouldn’t work properly. There’s, also a multiplayer mode, but since it’s only split screen, i wasn’t able to test it.

It offers team deathmatch and normal deathmatch and, like the rest of the game, i assume it’s. A technical mess, while i’ll, normally sing the praises of anyone who includes local multiplayer in their game.

It seemed odd to only include local multiplayer and no option for online play both play. Magic and publisher. Microids are more than aware of the game’s technical issues and have apologized for the state of the game.

They blame the kovid 19 pandemic for issues with the game’s; production as well as the day one patch, and have released a road map for upcoming patches that include new levels, modes, skins and multiplayer maps.

All of that is understandable, and it’s, good that both the studio and publisher have apologized, but the state of this release is absolutely unacceptable. The game is a mess even after the day. One patch, instead of apologizing and promising to fix things, play magic and microwaves, should have delayed the game or at least pulled it from storefronts until they fixed it.

It’s, nice to promise, fixes and updates, but as anyone who has ever seen a studio promise something and not deliver knows there’s, no guarantee that what they’re saying will come to pass in the meantime, you Can still buy 13 and play magic and microwaves can still profit off of it.

If you do the game you’ll play is a broken buggy mess. You can’t play a promise and you certainly can’t review. One you can only review the game as it is right now and right now, 13 is one of the worst games i’ve ever played, i hope, play magic and microwaves, keep their promises and turn 13 into a game that is worth playing because There is potential here doing that, however, will require more than just fixing a few bugs.

It will involve updating the way it looks. Enhancing the enemy ai, making the guns feel good to use developing stealth gameplay that actually works, and so much more 13 might be a good game one day, but it’s, infinitely more likely that it will simply be a mediocre one right now.

It’s outright bad. If you want to play 13, i suggest that you go by the original release. It’s flawed, but, unlike the remake it’s, a finished product, it looks better and it’s. A heck of a lot cheaper play, magic and microwaves can promise all the fixes they want, but until they actually deliver, we’re left with a bad game that they chose to release anyway and absolutely no reason to take them at their word and That about does it for this video.

If you enjoyed what you watched and want to see more from gamingbolt, you can always hit that subscribe button and turn on the bell icon. Next to it. That way, you will never miss any of our videos. You

Fri Nov 20 , 2020
https://www.youtube.com/watch?v=bNrDnKtEAfI For a series known for virtually non-stop shooting it’s surprising, how much time you spend in call of duty, black ops, cold war, single player campaign with your weapons holstered, certainly more than any other game in the franchise’S 17-year history, but whether it’s walking around your safe house […] 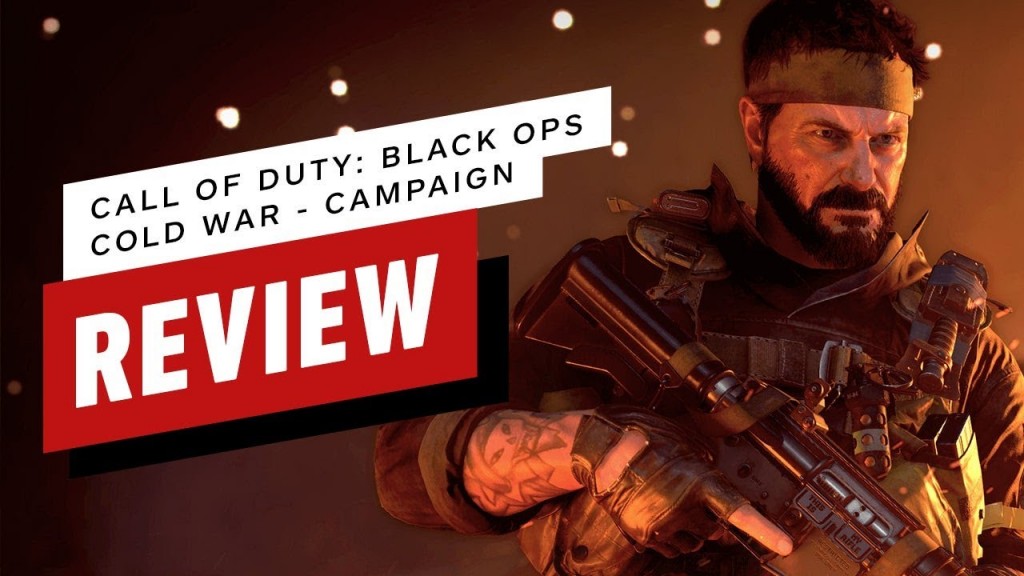