Smash like and subscribe right now or this thing is going to steal all of your v-bucks, so I’m annoyed. There was supposed to be dinosaurs in season five of fortnite. Everyone thought that there were gonna be huge dinosaurs, walking around the map.

Sort of like sharks when the map was flooded season five came and there was nothing no sign of dinosaurs and that annoyed me because i absolutely loved dinosaurs. So it got me thinking what, if i bring dinosaurs to fortnite myself and you might be wondering to yourself, how am i gonna do that? Well, let me show you that’s right dinosaurs in fortnite, we’re gonna be using our epic sense of smell to hunt down targets, and we’re gonna chomp down on the entire lobby, make sure to Smash like and subscribe, if you enjoy the content, i’m uploading every day this month and without further ado, let’s become dinosaurs.

I’m, going all out with the dinosaurs dude. We’re, bringing back dinosaurs, dinosaurus rex. I guess i could probably use the uh. I don’t want like a mix of all of them, so i ‘ Ve got the purple one, the green one and the red one.

Bronzo’s, oh yeah! Oh my god. I’m dripped out like to the to actually new levels of drip. What am i coming down like a meteor? Wait? Oh, my god that should be the glider of meteor, so disrespectful yeah, oh yeah, and i i swear there was like a a dinosaur emoji yeah and, like you stomp on the ground, yeah yeah, i actually i don’t like jesus christ.

I have dude, how crazy is it? The dinosaurs are back what like what i thought. They all died in a meteor. I thought they were all extinct. They’re back dude. They’re back in fortnite. That’s crazy. We were promised uh.

We were promised dinosaurs, this season so uh here they are it’s, not probably not what you expected, but uh it’s. Probably the next best thing. If you ask me, oh my god, we look so goofy dinosaur back dude.

I don’t. Even at this point i feel like i’m, just not even scary in the slightest i make up for it yeah the truth. You’re, my like you got the skier factor. It’s called sasquatching, so it’s, not even like hey.

We’re scuff dinosaurs for the next best best thing and this this challenge. We have to kill as many people as possible. The dinosaurs are taking revenge and we have to obviously land at the stealthy stronghold, which was uh the dinosaur poi.

We can only loot from there, so let’s. Do it let’s. Do it look at me crashing in you thought the meteor hit the dinosaurs. No, we are the meteor. Look at me. I’m. Oh, i’m literally on a meteor right now.

I’m going on the hunt immediately because how dare they think that they can land here? This is our poi. We all at we all hiding huh you in here mistake. That was a mistake. Buddy i’m. Sorry, i’m. Sorry, and now i have to shake down everyone because it because dinosaurs have insane sense of smell.

I don’t know i just freestyled that look that’s code, tony’s, just chilling in a tree! Oh, oh! Wait! I’m afk donny, okay, that guy i don’t know what he’s. Doing i don’t even see who you’re shooting at you got some crazy sense of smell.

They just haven’t; they like they really just have a bad body. Odor over here. Take a shower. I’m just getting this the shield. Oh, my gosh, i am so stacked there’s, a guy that’s. Chilling in this board.

Chill chill chill. I got you bro. I got you, i got you don ‘ T worry! Oh wait! Why are these guys good? Coming in he’s dominated every shot, another one, just game, ending pic shield up shield up; no worries; no worry! Oh okay, nice! Knowing your friend yeah don’t mess with the dino dog.

See these bushes. Here there’s, a guy just chilling yeah dude. You never know what to expect as a dinosaur dude you got ta, be you got ta, be aware of these threats. Why are we facing this kind of targeted violence? I’m, not sure, but that’s.

Why we’re, taking a stand against it. I’m just trying to vibe yeah. This is there’s, so many predators in the jungle dude sniper rifle as well. Oh, my gosh, i haven’t, got a lot of extra loot, but it’s.

Okay, we’ll, make it work. Where are we heading to now pleasant park? Is the next uh place? We’re gonna head to jurassic park jurassic park? Oh my god! This is on fire. This guy right here i don’t. Remember i don’t, remember uh dinosaurs driving cars, but i’m gonna allow it where the heck are the people okay hold on salty, salty, salty, salty hundred percent.

I’m gonna cop that real, quick, just real, quick, all right, i’ve got i just i can smell it. I can literally smell it. They stink these guys have really bad odors yeah. I hear them yep right here dead.

Let’s. Go out of the game. Buddy i didn’t shake him down it’s. Fine! I already know where he is. He’s close dude. He’s close. I can smell good. I’m yeah dinosaur like we’ve had a bit of time like away from hunting people down and like it’s been what like two million years or so so i’m.

Obviously, like a little bit rusty, something along those lines for sure i smell them, i smell a bot where they at bro, where they at come in, i’m coming, i don’t, have any like mats or anything, but i’m on my way hold on, i’m close.

I’m, close tweaks. What the nice, what’s? He doing he’s thanks yeah i don’t know what the what the play was there, but hey at least i’ve got some loot got some clutchination dation, okay, minis very nice.

I got ta make it on me. Let’s. Go. I got one already nice, okay, that that dude is a hundred percent rebooting right now i can smell it. Oh they’re fighting. They’re right there. Oh, my gosh, this is so easy.

I can smell them. I know exactly where they’re, going. Okay, the people running in right now these guys look decent, but they’re, not as good as us, so it doesn’t matter. No one’s as good as us. We’re literal dinosaurs.

This guy is literally going up yeah. It did that’s. What i thought crack [ Music ] dead, let’s! Go that’s. What you get baby, you don’t mess with the dinosaurs we ‘ Ve also got this as well. We’re chilling.

We’re chilling that dude just went up and up that guy must have been like. How are these dinosaurs flying dude? I didn’t realize dinosaurs could fly what that’s, an invisible car. It was invisible for me.

Now we’re, going back to where we landed yeah, and now we have to these last people. We definitely have to shake down right out here. Oh my gosh, that was the best night. He’s ever thrown in his life [ Music ].

Ah, where you at, are you hiding boy? Actually, this i didn’t get this guy’s. Loot then? Where is it? Did? He have anything. Do you have anything of use? Oh yeah, matt’s; okay, cool! Look at this hello! Oh my god, hey guys! How are you vibing so hard? You guys it’s me bronto whoa, flying dinosaur, pterodactyl? Okay? Where are these these final gamers? We got to kill the rest of them.

We just have to. Where are you guys, where are y’all hiding at well? They got to be in here. If my dinosaur senses aren’t wrong, they are literally in our what what is this called closure in our enclosure? Oh, we’re.

Being hunted, wait. What pleasant uh there’s, an npc that’s like over here yeah there’s, one right here, but did they hire her or is she just running? No, they have to be in here. No, no! They’re, not dead, he was hiding in the bush.

I have to get him out of the game. He thinks that he can hunt us now that’s, not how this works. I just had to put him in his place: real quick, let’s, go dude, let’s. Go dinosaurs are back and fortnight wow, the new fortnite dinosaurs are epic.

I’m so glad that fortnite added totally real dinosaurs make sure to smash like and subscribe, and i will see you guys tomorrow for another epic, video, [, Music, ], um, [, Music, ] 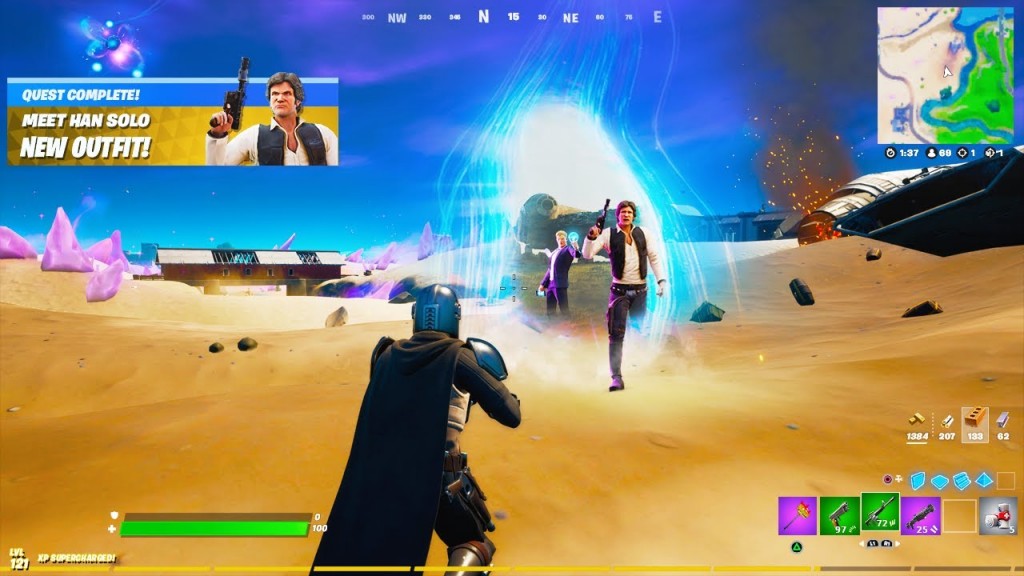